For all you 90’s kids, do you remember the game Mall Madness? In Shanghai, the game would be like “Attention mall shoppers, there is a sale at the Gucci store. And at the Prada boutique.”

China LOVES fancy malls and the cosmopolitan city of Shanghai is no exception.   Gorgeous, posh, and just plain old expensive-looking, malls are on every corner in the downtown area. And there’s no shortage of high-end designer shops.

But outside the lavish shops, there’s an intense and highly populated city to explore. And as you discover different neighborhoods, you’ll see a fascinating combination of traditional Chinese architecture, stunning tree-lined side streets, high-tech financial buildings, and a light show prettier than in Times Square or Vegas.

With a population of over 24 million people, one would think you’d be running over people in facemasks, but it surprisingly doesn’t feel overcrowded. There’s plenty of space, more then enough soup dumplings to go around, and a beautiful city to uncover. 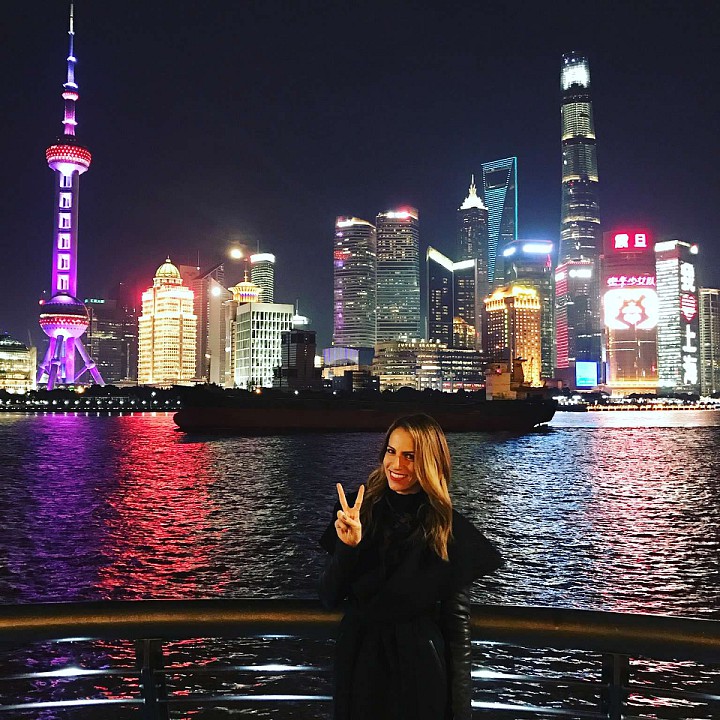 Note that you need a Visa before you leave the US and plan on it taking some time. The Chinese embassy is serious about getting every little detail before they allow you in. And expect to pay top dollar to enter. I used CIBT Visas.

The PuLi Hotel – Chic and sexy, The PuLi Hotel is on the other side of the financial district of Pudong so it’s easier to get around and see the main sights. The long and narrow lobby bar is perfect for a trendy version of afternoon tea or happy hour cocktails. As for the room, I was a big fan of the layout with the bathroom spanning the entire length of the room, a soaking tub with a view, and a high-tech heated electronic toilet that basically says welcome to China.

Soup dumplings are a way of life and it was my duty to run around the city sampling as many xialongbao as I could fit in my schedule (and mouth).

They explode in your mouth, not in your hand.

Din Tai Fung – Don’t be shocked when you find out this is a chain, mostly located in malls. Chain and mall restaurants are two food categories I tend to stay away from, but not in China. This place is legit and in fact, many top restaurants are found in malls. So if you’re looking for a Forever 21 and a Burger King, don’t go to Chinese malls. Back to the dumpling experience – An easy way to ease your way into xialongbao, Din Tai Fung has an English menu with photos. My favorites were the pork with black truffle and pork with hairy crab.

FuChun Xialongbao – My #1 choice for soup dumplings in Shanghai, this is as local as it gets. There is no English menu, no photos, and no one speaks English. I love a challenge and always welcome an experience to attempt to feel and act like a local. Always crowded, order at the counter and then wait for a seat. It’s totally acceptable, and in fact encouraged, for people to literally stand over others as they finish their meal in order to take their spot when done. No waiting in lines around here! You have to fend for yourself. Order the wonton soup and pork and shrimp dumplings. Google translate is your friend or better yet, just point to what others are eating.

Nanxiang Steamed Bun – An Anthony Bourdain recommendation, this dumpling and bun stand is right outside Yu Garden/City God Temple. Follow the locals and order the massive crab and pork dumpling, sipping the soup with a straw and eating the rest after.

Yang’s Fry Dumplings – This place is the bomb. Fried pork dumplings of perfection that squirt everywhere when you take a bite. So wear a bib, or just embrace it and be prepared for the locals to laugh at you.

When you’re craving more than dumplings, prepare to read a novel before deciding what to order.  We were presented with a book full of gorgeous food photos each time we sat down at a restaurant.  The menus are pretty enough to display on your coffee table and confusing enough for indecisive hungry people to try and decipher.  When in doubt, over order.

Mr and Mrs Bund – Named one of the top 50 restaurants in Asia, I immediately booked a reservation. I have to point out that the food wasn’t top 50 on my list. However, the trendy vibe, incredible rooftop terrace, and playlist of American Christmas music made it worth the visit. A local later informed me that the brunch is actually much better. Chef Paul Pairet has another hot restaurant in Shanghai called Ultraviolet, which is said to be an insanely cool experience utilizing all of your senses. Located in an undisclosed location, book this well in advance if you’re okay with the $1,000 price tag. This trip, I preferred to spend most of my Chinese Yuan on soup dumplings. Not mad about it.

Lost Heaven – Walking into the French Concession location, I wasn’t expecting the hip atmosphere highlighted by dark, red lighting. It’s very cool and the food is aligned with the vibe. There are other locations and I can only speak for this one, but the veggie cake, eggplant in tomato sauce, and crispy pork were out of this world.  You can’t miss the thai zeed cocktail described as such – “we can only tell you that there is some great quality vodka blended with coconut, fresh lemon, and chili flavors.  The rest is a secret recipe of the Yin Brothers”  They had me at vodka, coconut, and chili.

Da Dong – Located (shockingly) in a mall, and yes, it has multiple locations (originally from Beijing). This upscale spot is famous for their Peking Duck, fully on display at each table before the waiter takes it back to cut and serve. You’d be crazy to come here and not order the duck and even crazier not to try the duck skin with sugar. It literally melts in your mouth. 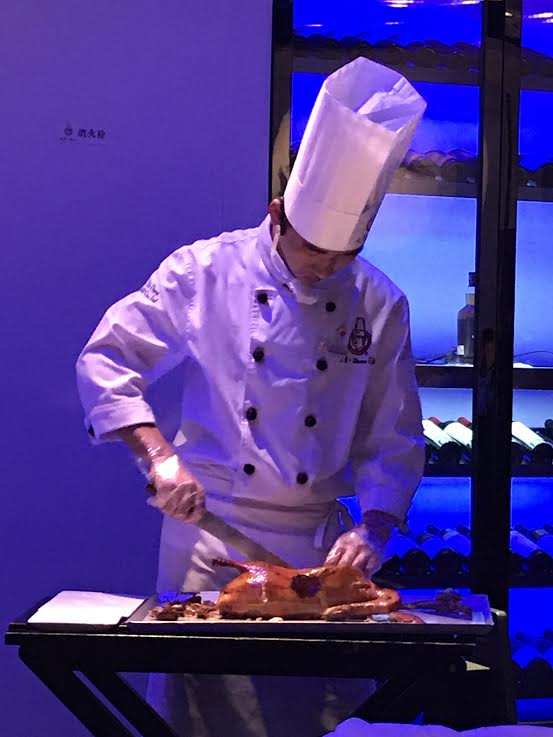 Looking for more hot spots in this cosmopolitan city? Some additional options from trusted sources:

M on the Bund

You might think afternoon tea is a British thing, but green tea originated in China! Tea houses are abundant and many establishments (like The PuLi Hotel) offer a beautiful service of afternoon tea. I headed straight to Song Fang Maison De The in the French Concession. Written up in Conde Nast Traveler, Vogue, and CNN Travel, this sweet tea house with a French twist is a must visit. The downstairs is a tea shop, walls adorned with beautiful tea storage tins. The upstairs is a relaxing tea house filled with wicker chairs, vintage couches, and floral prints. I enjoyed tasting the Tieguanyin (a green oolong from south of Fijian) and Anji (white tea from Zhejiang) and I even bought some to take home.

The Bund – Widely recognized as the symbol of Shanghai, this waterfront area is a must see both day and night. It’s beautiful, futuristic, and glam, with a sprinkle of old Shanghai as the dragon boats go by and locals practice tai chi. If you’re looking for the perfect photo opt, note that the light show turns off at 11pm prompt.

People’s Park – Where you can find wide open spaces, lush greenery, and men gathering for games of mahjong.  The park on its own is pretty to wander around any day of the week, but it’s a fascinating cultural experience when you visit on a weekend to see the Marriage Market. The Marriage Market is where parents display “resumes” of their single children on a piece of paper taped to a colorful umbrella so other parents can set them up with their children. In one of the most modern cities in the world, old traditions still exist. No matter your belief on this matter, be respectful – don’t stare or be too obvious when taking photos.

French Concession – Leave a day to get lost in the streets of the Former French Concession with its gorgeous tree-lined avenues, boutique shopping, cafes, and art galleries. While you can truly spend days exploring, focus on Fuxing Lu and Wukang Lu. While on Wukang Lu, check out the pedestrian area Ferguson Lane with a very European vibe. For high-end fashion and historic lane houses, visit Xinle Lu and Changle Lu.

Xintiandi – A pedestrian-only shopping, eating, and entertainment district, it’s also where you can find traditional shikumen or stone gate houses.

Taizenfeng – Another area to discover boutiques, shops, and cafes, but with a focus on art studios and craft stores.

Shanghai Tower – On clear day, the highest observation deck in the world will show off incredible city views from a whole different angle. You’re literally on top of Shanghai as you walk over buildings (or terrifyingly grab onto the rail while your stomach drops attempting to walk on a ground made out of glass). 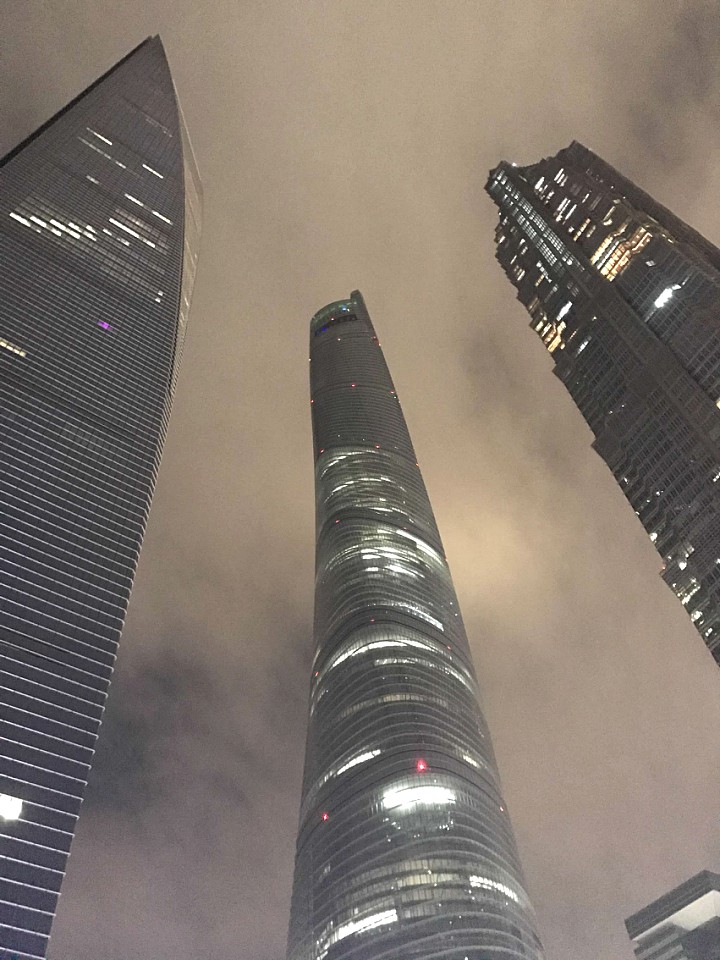 Yu Garden – A traditional Chinese garden that is absolutely stunning year round. Yu means pleasing and satisfying and that it is. You’ll be feeling those zen vibes as you wander over bridges and koi ponds, and admire the pristine garden layout and Chinese architecture.

City God Temple and Shanghai Old Street – Like you stepped back in time, this area is a traditional moment in the heart of a modern city. The bright red pagoda of City God Temple stands proud, highlighted by the bright gold lights at dusk. At first glance, Shanghai Old Street and the entire area seem too touristy to be real, but its authenticity comes alive as you walk deeper to discover hundred-year-old boutiques and Chinese traditional medicine shops.

Bar Rouge – A little on the clubby side, it’s worth it for the incredible terrace view of the Vegas-like lit up Bund at night.

The Parrot – Head down a back alley for funky music and cocktails with a laid-back vibe.

Le Baron – The IT club of the moment, it’s not easy getting in. We went with a local who was hilarious in her efforts of attempting to get past the bouncers and red rope. She basically yelled at them after giving a fake name of a VIP member. Somehow, it worked. A couple bottles of champs later, and we were dancing with locals under the DJ booth.

Flair Bar – Climb (or take the elevator) to the 58th floor of the Ritz for a stylish mecca of fashionable Shanghainese and expensive cocktails. Complete with an outdoor space and view, it’s known as the highest al fresco dining space in China.

Speakeasys – If I had more time, I would have checked out the new breed of speakeasy bars as written up in CNN Travel.

Note that just when you thought smoking was banned from all public places, it’s allowed in China bars. Be prepared (cough, cough) and plan to dry clean your party attire afterwards.

After running about the city, spend a couple hours at the Anantara Spa at The PuLi Hotel. With the same dark and chic atmosphere as the rest of the hotel, you’ll sink right into this urban oasis. The treatment rooms are modern and stunning and give off a sexual vibe that says, rub me down. Go for the 90-minute signature massage. Stay for the steam and sauna.