Known as Heaven on Earth, Hangzhou is filled with so much natural beauty among the tea fields, lotus flowers, and calming pagodas over the panoramic photo-worthy West Lake.

For most Americans, Hangzhou is still somewhat of an unknown gem, but growing in popularity as it made Travel + Leisure and The New York Times lists of places to go in 2016. It was also the host of 2016’s G20 summit. Book your trip before it’s too much of a tourist hot spot.

While Hangzhou is actually quite the bustling city (and it even happens to be the home of Alibaba), staying on West Lake is a welcome escape. It feels more like a charming small town on the water where you can sip your longjing tea quietly as you watch the fog dance on the lake. 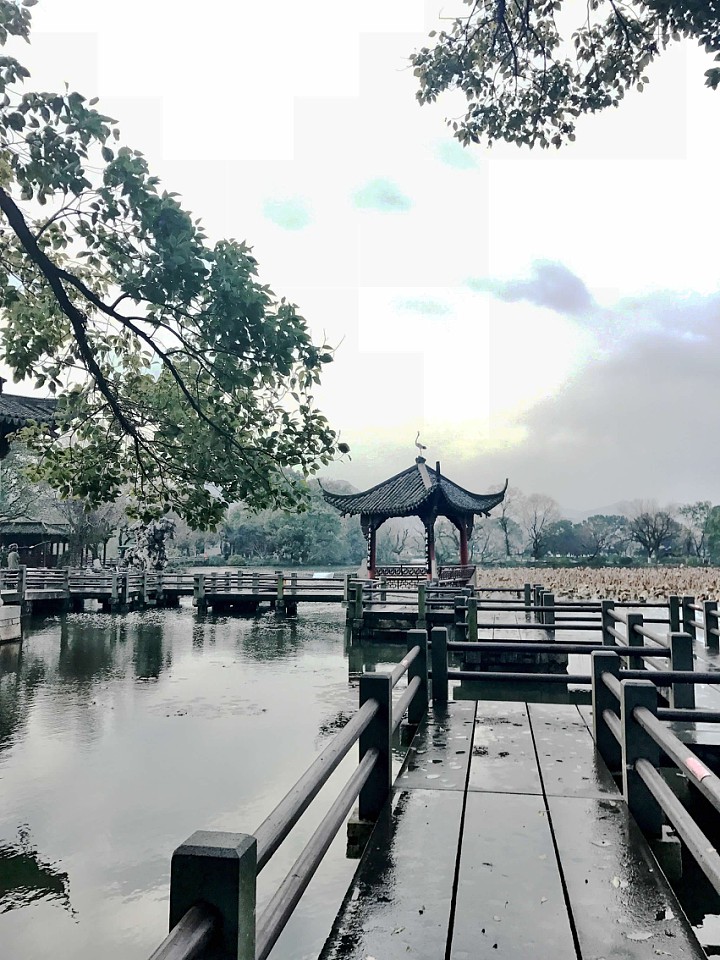 The high speed train will get you there in under an hour from Shanghai.

Four Seasons – Located on West Lake, the hotel itself is a stunning and tranquil environment, interlaced with serene gardens, lagoons, and a gorgeous infinity pond overlooking West Lake. Highlights of our room included a soaking tub with an enclosed terrace looking out to the garden; the most perfect spot to relax after waking up from a sleep in the most comfortable hotel bed I’ve ever experienced. But what made this hotel exceptional was the above and beyond five star service from the highly attentive staff. From the moment we arrived, we were greeted by name and truly felt right at home. They hit every little detail that was unnecessary, yet much appreciated. I asked for their recommendation on where I could purchase local tea and the next day, I had an entire box waiting for me in the room. My husband left his iPad on the nightstand and housekeeping left a screen cleaner with a sweet note. When the weather didn’t cooperate for our traditional wooden boat tour, they set up a guide to join us on a larger tourist boat that was allowed out on the lake. I could share stories for days. I’d like to give a huge shout out to the Four Seasons team, especially Wayne, Kevin, Randy, and Sophie who even arranged for us to have a “guardian angel” at the Four Seasons Kyoto where we were visiting shortly after this trip. If you stay there, please say hello from The Long Weekend! And no, this is not an ad.

Also worth noting is Luxury Collection’s Azure Qiantang for loyal Starwood members and the Hyatt, which has an excellent location in the middle of West Lake, right on Hubin Street.

A little farther out of the way is the Amanfayun, which is supposed to be lovely. Even if you don’t stay there, enjoy tea in their tea room.

Grandma’s House – We arrived at the location on Hubin Road to a crazy long line of locals pouring out the door at the odd hour of 3pm. I immediately decided it was worth the wait. After ordering an obscene amount of food for 2 people (per usual, by pointing at photos in a hundred page hardcover book), I was able to confirm that this place was the real deal. It’s hard to pick favorites, but if I had to… a local dish of shrimp in green tea leaves, grandma’s pork, and pork with pepper and eggs. But the standout? The green tea cakes. More like dessert, it’s a sandwich of two green tea pancakes topped with sesame seeds and filled with an unknown sweetness seeping out the middle. Oh, what I would give to have another bite right now! If anyone knows where to get these in Chicago’s Chinatown, please let me know by commenting below!

Jin Sha – Located in the Four Seasons, it’s not your typical hotel restaurant. Making the list of China’s top 50 restaurants and filled with an abundance of local dishes and flavors, this spot is not to be missed regardless of where you stay. The wagyu beef and truffle dumpling was a very welcome and tasty explosion in your mouth but the real star was the crab with bean noodle, similar to a glass noodle. I pretty much licked the bottom of the bowl. Don’t forget to order the BBQ pork and seafood hot and sour soup, two other standout dishes. Note the beggars chicken is a local Hangzhou dish that Jin Sha is known for, but you need to order a day in advance. So plan ahead, as we did not.

Dragon Well Manor (or Longjing Manor) – Easily one of my favorite restaurant experiences in all of my travels, this is a must stop on any Hangzhou itinerary. The beautiful garden setting overlooks picturesque tea fields slightly covered by a misty blanket of fog that only enhances its beauty. A woman greeted us directly from our cab and took us on a short journey through the zen-like gardens under a red umbrella, amidst the light rain. We followed her to our private dining room, windows open to the stunning landscape, feeling the breeze of the drizzling rain. Every dining experience is private, complete with a waitress, door to the kitchen, and even a private bathroom. The entire experience is special, to say the very least. And the food… everything is made from natural ingredients; whatever was found in the local farms that day. We were served a set menu of seasonal delicacies, some of my favorites being:

The milk soup came with a variety of toppings from savory to sweet. It’s a choose your own adventure (of toppings), surprisingly delicious work of art.

The tender pork belly served with a fresh green vegetable in light oil, where the Chinese name of the dish has a special meaning: You have to give something away in order to get something back.

Turtle soup was a new food adventure for me and I’m dying to come across another restaurant where it’s on the menu. The broth had an intensely delicious flavor that was heavy but not overpowering. The texture of the turtle is something between squid and mushrooms. You may have to deal with comments from American friends back home that aren’t okay with cooking up that sweet little creature. My response? When in Rome…

The fish cheeks were delicious, and the taste was only enhanced by the story of how they were made. Our server came out with a fish bowl to introduce the type of fish we were about to consume. While they only had one fish on display for us, we learned that they used 200 fish just to make this one dish. That’s how tiny the actual cheek is. 200 fish! And that was just for our small table of two. I guess they’d have to use an entire pond for a full dinner party.

The water lily peach dessert was another beauty of a dish, which was refreshing and welcoming after a long meal where I didn’t say no to a single course.

Lou Wai Lou and 28 Hubin at the Hyatt Hotel are two other spots on our list and we plan to check them out on our next trip.

Liefeng Pagoda – A gorgeous structure topped with gold that can be seen from many angles of Hangzhou. The original structure collapsed in 1924 due to people stealing the tower’s bricks after a superstition that the bricks could repel illness and miscarriage. Reconstruction was completed in 2002, but the original base stayed in tact and now houses artifacts that were discovered in an underground chamber. Take some time to wander through the many floors, reading about its history and admiring the golden ceiling. Go at dusk when it’s light enough to see the view from the top, but dark enough to marvel at the lit up pagoda as you leave.

Hefang Street – A pedestrian street filled with authenticity from the shops to the food stands. Snack on traditional street snacks like stinky tofu and wander through the shops selling genuine silk fans and umbrellas. Venture into a Chinese Medicine shop where Ginseng roots are on display like the queen’s crown jewels. Chinese medicine says Ginseng is for long life, symbolized by the length of the “legs” on the root. Older men especially will pay thousands of dollars for the best of the best. Find herbs and natural remedies for everything from curing a cold to preventing cancer. We happened to go with a local who was able to translate all our questions to the pharmacist. It was intriguing to say the least, as it was nearly impossible to leave without purchasing something to ensure a long life.

Hubin Road – A pretty tree-lined street on the banks of West Lake where you can stroll around watching the fog prance on the waters of West Lake. 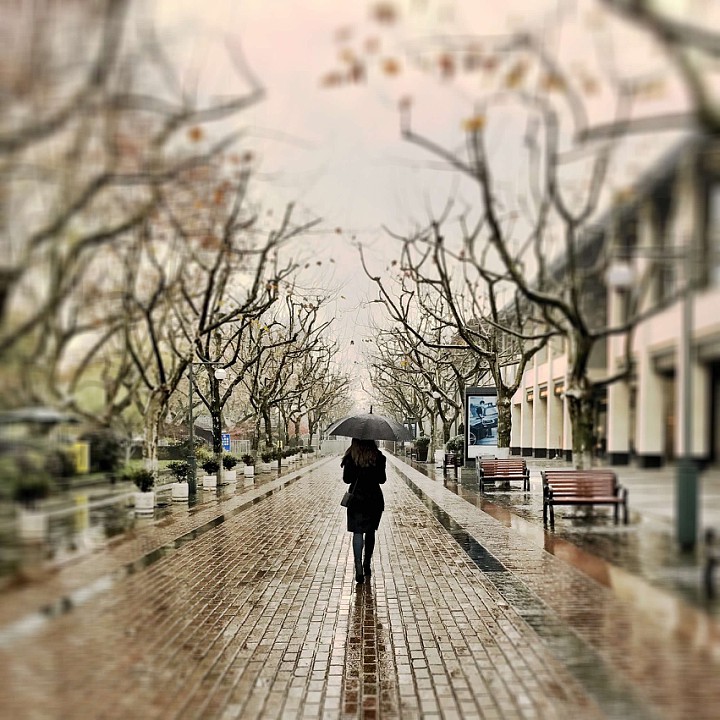 Linying Temple – One of the largest Buddhist temples in China, the name is translated as Temple of the Soul’s Retreat. It’s more than just a temple, it’s a garden filled with grottos and rocks carved with Big Belly Buddha. Once at the actual temple, burn incense while making a wish or saying a prayer before admiring the golden gods inside.

Broken Bridge – The most famous bridge on West Lake, known for its beauty and love stories. For a spectacular view, go for sunset. Bring your camera.

Silk Market – Since Hangzhou is China’s silk capital; you gotta bring home the goods. I ended up finding beautiful hand-made silk robes at the Four Seasons shop. If you have more time, you can spend hours rummaging through new and old silk boutiques on Hefang Street or discovering custom-made silk items on Silk Street.

Bike West Lake – Rent a bike for a different mode of transport to view the beauty of West Lake.

West Lake Boat Tour – Cruising down the lake in a traditional wooden boat is the best way to see West Lake from another perspective. Located all around the harbor or even through your hotel (The Four Seasons has their own wooden boat), it’s recommended to go in morning to catch the beauty of the fog slowly rising over the waters. If it’s too windy or a wooden boat isn’t your thing, there are options to take larger dragon boats as a tour to the islands on West Lake. 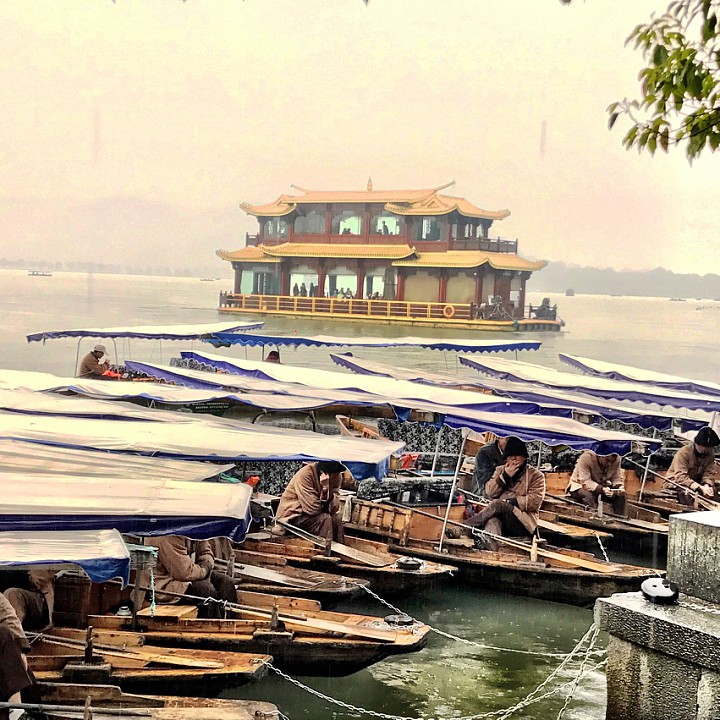 If you’re visiting in spring or summer…

Tea Plantation – See tea leaves at various stages of processing and even pick your own and have a taste of the finished product. Book a tour to visit a tea plantation with a break at a local farmer’s house.

Impression West Lake – An evening spectacle of music, light, and dance. An entire show staged on West Lake, it’s a performance composed by world-class musicians and led by a famous director.

The Four Seasons spa is a sexy oasis of private treatment rooms accessed through a long dark hallway lined with flowing water.

Hangzhou displays different aspects of beauty with each changing season and I can’t wait to be back in summer to see the lotus flowers in bloom. 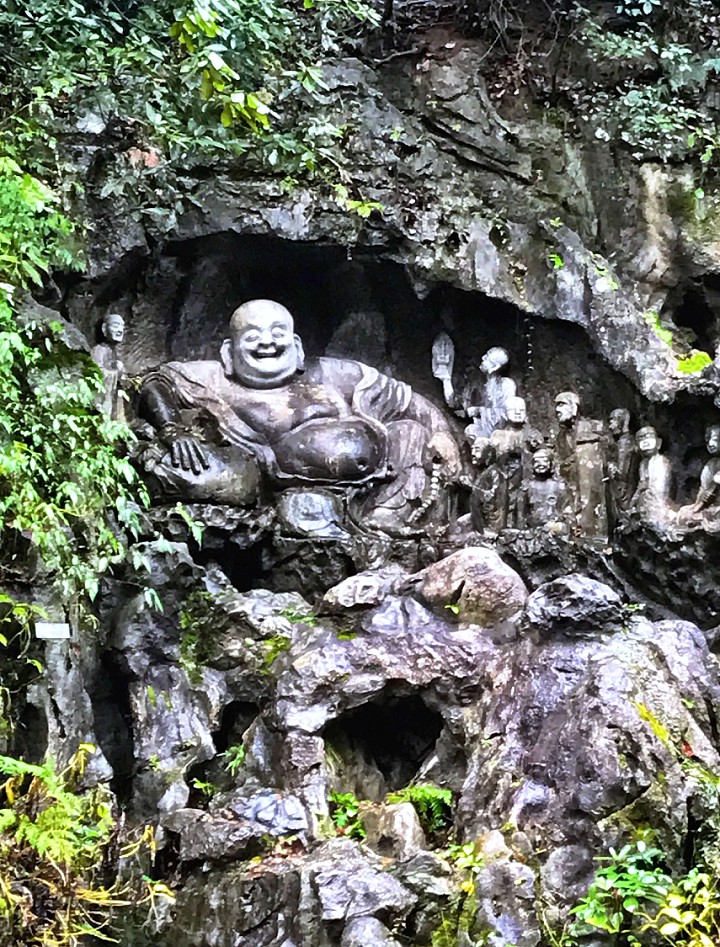 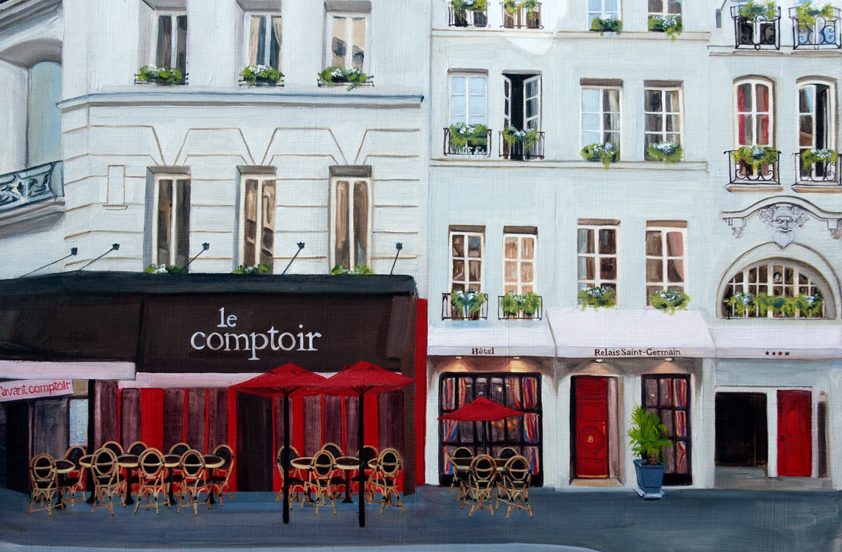 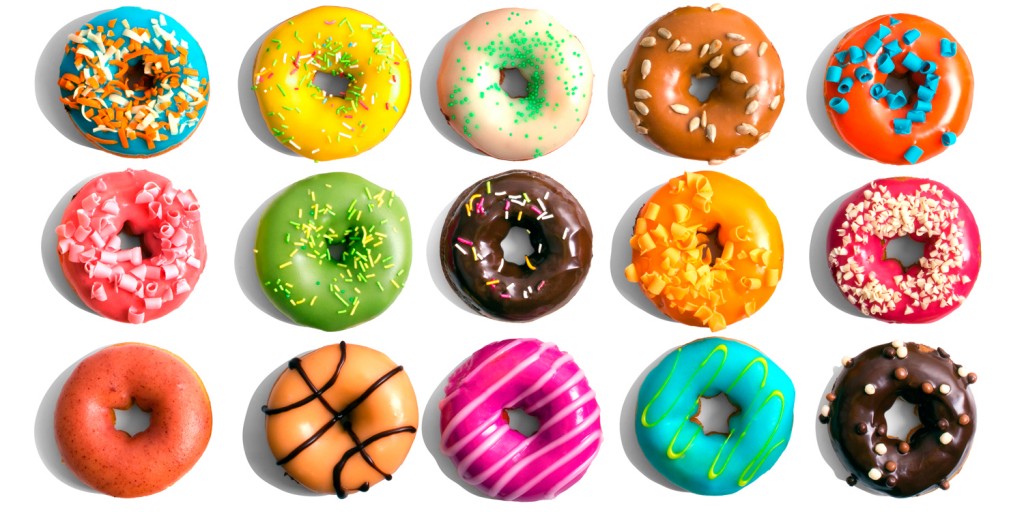